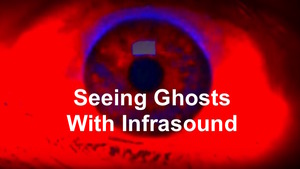 Everything has a resonant frequency, even the human body. In fact, strange things happen when the the resonant point of a particular body organ occurs. All of these resonant frequencies are in the infrasonic range, meaning they’re below the point of natural hearing under 20Hz and appear more as clicks rather than a steady tone. Indeed, infrasound can do some strange things as you’ll see in this video.

The human eye has a resonant frequency of 18Hz, as shown by a study by the U.S. Airforce, and when exposed to that frequency, the human attached to those eyeballs begins to see objects in the periphery of his/her vision. Ghosts? Spirits? No, just interference with the visual perception of the eye itself because of the vibration were we begin to see things that just aren’t there (unless you believe in that sort of thing). Much the same thing happens when you rub your eyes hard and you see the bright lights across your field of vision known as phosphenes.

Infrasound can cause damage to the body even though you can’t hear it. Vibroacoustic Syndrome because of infrasound generated by things like wind turbines and industrial equipment can result in depression, violence, decreased cognitive ability, and a whole rash of other symptoms.

Of course, the alleged “Brown Note” where a human supposedly loses bowel control is said to be somewhere between 5 and 9Hz, but that’s yet to be proven despite many attempts.

In the following video, Adam Neely attempts to see ghosts via infrasound, but does it in a very entertaining and educational way.