A number of readers recently asked some questions regarding the sound of vintage instruments, which prompted me to think about this excerpt from The Ultimate Guitar Tone Handbook (written with writer, composer and good buddy Rich Tozzoli) that describes some of the intangibles that went into manufacturing Gibson humbucking pickups in the 50’s and 60’s.

As you’ll see, there are a lot of external factors that went into making a pickup back then, and those factors pretty much be applied to all instruments in one way or another.

“As if the known factors in building a pickup weren’t enough, consider the many intangible factors as well. For instance, most pickups loose their magnetic strength over time because of environment and electrical interference. Pickups can become weakened or demagnetized completely by leaning your guitar against an amplifier with large transformers, or even from taking your guitar too close to the train motor of a subway (as happened with Andy Summers of The Police).

Another intangible is the fact that tolerances of just about every component were much looser until the 90’s. While the difference was indeed subtle, add enough components at the edge of their tolerances together and you suddenly get a pickup that sounds different even though it’s made the same.

Manufacturing intangibles are a whole other story and for that we’re going to go a bit into the history of the Gibson humbucker.

The Changes In The Humbucker

The first humbucking pickups on the 1957 models of Gibson guitars had a sticker on them saying “Patent Applied For” as the design was in the review cue before being granted a patent (see the figure on the upper left). These became known as PAF pickups (“Patent Applied For”) and have become highly sought after today for their great sound. The problem is that most PAFs sound different from one another due to manufacturing process of the time.

Until 1961 when Gibson standardized the selection process, they randomly used different strength magnets (grade 2 through 5) in their pickups, which accounts for some of the reasons for the different sounds. To make matters worse, sometimes a shorter magnet was selected (mostly seen in gold-plated guitars for some reason), which decreased the power of the magnet as well.

In July of 1961, Gibson consistently began to use all short Alnico 5 magnets, although occasionally a few Alnico 2’s showed up. In 1965, Alnico 5’s became standard in all pickups, which finally brought about a bit of consistency to the process and the sound.

If that weren’t enough, the number of windings on the pickup varied enormously as well, especially in PAFs. The early coil winding machines didn’t have an auto shut-off so the workers would shut off the machine when the bobbin looked full, which was at about 5000 turns. As a result, no two pickups were ever the same.

Even when Gibson bought a winder with an auto-stop, there continued to be problems even though the pickups became more consistent. The stop mechanism was controlled by a fiber wheel which would wear out and break, at which point the workers would approximate the number of winds by timing the wind, which resulted in more inaccuracies.

Since the humbucker is made up of two coils, sometimes the windings of each coil were different even though the total number of turns were correct. This would cause certain mid-range frequencies to stand out and give it more bite. 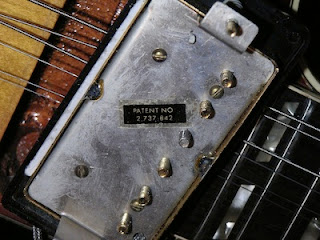 By mid-1962, the patent for the humbucker was granted and Gibson changed the sticker to read “PATENT NO 2,737,842” which was actually the patent number for Les Paul’s trapeze tailpiece. No one knows for sure if printing the wrong number was merely a mistake or a way to throw off the competition.

From 1963 to 1975, these “Patent number” pickups are very consistent, as are the ones thereafter when new, more precise winding machines were used (see the graphic on the left).

In the 1990’s, Gibson further refined their manufacturing and began to manufacture pickups based on the original PAF design.

Thanks to precision modern manufacturing techniques, these pickups are remarkably consistent, which also means that a “magic” pickup that was created as a result of loose tolerances is no longer possible. That being said, most experts agree that you can now get 90% of the way there sound-wise for 10% of the cost of a vintage PAF.”

Any purchases made through our Amazon links help support this blog at no cost to you (just click here).