5 Great Session Tips That Will Save You Time And Money 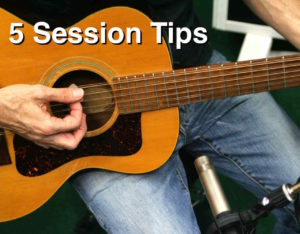 When you’re recording basic tracks, especially in an expensive commercial studio, it’s easy to get off track in a way that not only causes you to waste time, but money as well. These 5 session tips from the latest edition of my Music Producer’s Handbook will ensure that not only the tracking session, but all the overdub sessions that occur afterwards, run efficiently.

“There are a number of things to remember when the session gets up and running that will keep every happy and motivated, with their full attention on playing and singing.

1. Start off with the easiest song. This is usually something that the band knows backwards and forwards. It will help everyone to get comfortable in a new environment, get into the groove of recording, and make it easier to move on to the more difficult tunes later.

2. Record a tuning note. This may seem a bit old fashioned, but it could be a lifesaver later. Before each session, be sure to record a 10 second tuning note before each song as something to reference to later, especially if there are no keyboards involved. This way, if for some reason you happened to use a tuning that was a couple of cents flat, you have the tuning note as your reference. Even with today’s tuners, sometimes the tuning note just makes things easier.  This seems like such a small thing, but you wouldn’t believe how much time it can save you down the road if a situation arises where you just can’t figure out why everything sounds out of tune.

3. Don’t forget to record a count-off for every song. If someone gets a great idea for adding something to before the song begins, you’ll have a tempo reference point to work with. Even if you’re playing to a click that’s being generated by the DAW itself, recording the click at least four bars ahead of the downbeat is a foolproof way to make sure that any pickup or opening part is easily executed.

4. Take frequent breaks. One of the best abilities a producer can develop is knowing when it’s time to take a break. It’s hard to keep anyone’s attention for more than three hours, so be sure to take frequent short breaks. Sometimes just bringing the band in to the control room to listen to a playback can break it up just enough so their minds don’t begin to wander. A ten-minute break can pump new energy into a flagging session, so the producer always has to keep his finger on the pulse of the players to gauge their concentration.

5. Keep the food light and have it delivered. When it’s finally time for lunch or dinner, going out to eat will waste a lot of time, and sometimes it’s impossible to get back in the flow of things afterwards. If the break is too long, it may take an equally long time for the players to get their focus back. One of the biggest problems to avoid is having a large meal, since normal digestion naturally slows down a player’s ability to concentrate. Keep the mealtime short, the portions small, and allow absolutely no alcohol so that everyone stays fresh and the session is kept on track.

These 5 session tips will keep you session running smoothly and keep all involved happy and motivated.”